Recently, I watched a let’s play of the Sega Saturn Magic Knight Rayearth game.  Isn’t that completely out of the blue, you might ask, and the answer would be somewhat yes:  initially, I was looking for a very specific track of instrumental music that I couldn’t find anywhere on YouTube (I eventually found it, but only as a midi) and in the process of doing so, found a LP of this game.  I love MKR, so decided to watch it.  The game is…problematic, to say the least, and the plot aspects of it barely scratch the surface of the depth that both the anime, and manga had.  After watching the game, I went to rewatching the anime, and this thought crossed my mind.

CLAMP’s main corner stone to me has always been, their central themes focus on love.  It’s fairly abundant  in any of their works, but Magic Knight Rayearth being their first one, I never thought that was the case for it.  Rewatching it older however, I realize I was wrong:  because underneath all of the magical girl, epic fantasy adventure, is a very subtle study of one of the many facets of love.  Spoilers for Magic Knight Rayearth beyond this point, you have been warned!

As opposed to say, Cardcaptor Sakura, which makes the relationships between characters very obvious, Magic Knight Rayearth takes a far more subtle approach.  And that’s because, the aspect of love they touch upon is very subtle.  At first, I thought that the overarching theme was how your love can affect others, and change them for better, or worse, in the case of Alcione.  That’s what I got after finishing the Sega Saturn game.  Starting to rewatch the anime though, the concept of love touched upon here is a lot more introspective than that.  It’s how loving someone can internally effect you, and your actions, and how it can be the driving force for your actions, for better, or worse.

The first, and most prominent, example of this is Alcione.  She loves Zagato, and will do anything to prove herself to him, because she thinks doing so will make him love her back.  Look a little deeper at this, and it’s really a lack of self-esteem and self-worth that drives her:  She trained under Clef so she could serve Princess Emeraude, another chance to prove her self-worth.  We can assume that somewhere between the show starting and Emeraude being kidnapped, that she fell in love with Zagato, and transferred her need to prove herself by protecting the Princess, to being useful to him.  In the end of the anime’s first season, there’s this really heart breaking scene between her and Zagato that just drives this point home, and has always made her this really sympathetic, tragic character for me, honestly one of the best character arcs in any anime for me still to this day. 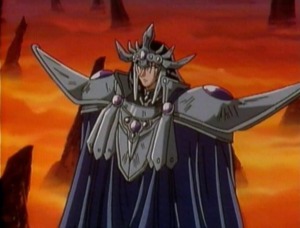 Zagato, on the other hand, takes a far more aggressive approach.  He loves Emeraude, finds it unfair that she’s been given the cards dealt to her, and wants to move heaven and earth to make sure she’s safe, and loved, and protected.  He’s a good example of how internal love can externally drive you to do extraordinary things.  Best example of this?  Making his own freaking Rune God!

The only people who had enough willpower to stand up to him were the Magic Knights, and that’s saying something.  Though I will say, rewatching the show, his lack of caring for anyone but Emeraude makes me sympathize with him a bit less.  I found myself yelling at the screen:  “Yeah, the Magic Knights feel bad about what they did later, and he loves Emeraude, but that doesn’t excuse treating every other character like garbage!”.  I suppose having that sort of reaction only proves my point further.  Zagato’s actions are extreme, but can any of us say we wouldn’t do something like that for someone we loved, who was not only doomed to eternal servitude, but their only way out of it was death?

Our main trio, Hikaru, Umi, and Fuu, all took a bit longer for me to try and figure out.  Hikaru is definitely the driving force for any of their character development.  Her determination, and love for her friends, is what drives her forward.  I’d say her drive is also a version of wanting to prove herself, but at the same time she genuinely wants to help the people around her, because of her love of life.  Because of that, both Umi and Fuu grow as a result.  Umi, becoming less selfish, and Fuu, becoming less selfless, and being less self-sacrificing than she started out as.  It’s honestly really hard for me to think of these three as individuals, because so much of the story hinges on the fact that they love, support, and care for one another in such a foreign situation, when if they were back in Tokyo, they probably would have never become friends in the first place.  In that respect, what internally drives their affection for one another, is protecting, and eventually caring for one another, and their mission at hand.  But honestly, that’s scratching the surface with these three, I could write a whole essay on the Magic Knights, they’re amazing!

CLAMP has always been amazing at writing realistic characters, no doubt about it.  The main reason why is because they touch on deep topics like this, and don’t shy away from amazing plot twists, like in this show.  Magic Knight Rayearth will always hold a special place in my heart as being the first series I watched as a preteen anime fan, and as the show that introduced me to the fact that being a voice actor was actually a profession.  Rewatching it, listening to its music, and just basking in the awesome that is Magic Knight Rayearth always makes me so happy!